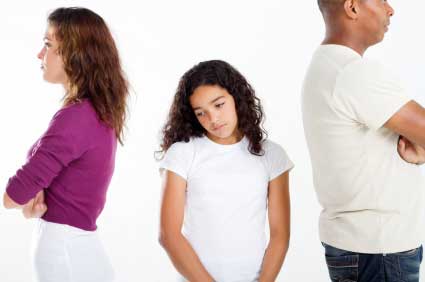 While divorcing parents may be able to bite their tongues about an ex’s shortcomings around their children, relatives and friends also need to be told to hold their comments, says Toronto family lawyer Angela Princewill.

There are many practical steps parents can take to ensure a split is less stressful on the children, but it is not solely their responsibility to keep the peace, she says.

“Don’t allow your relatives, neighbours or friends to say negative things about the other parent in front of the children,” Princewill tells AdvocateDaily.com.

“It’s not helpful on any level. There can be psychological consequences all around. They don’t need to know, for example, what their parent did that may have caused the separation.”

She says while there is no easy way to tell the children that you are splitting up, reassurance is key.

“Let the children know the breakup has nothing to do with them and that you love them unconditionally, says Princewill, principal of A. Princewill Law Firm.

“Tell them that things will be different, but everyone will be trying their best to make the transition as smooth as possible.”

Each parent must refrain from doing anything that might harm the kids during a divorce — putting on a united front is always best, she says.

It’s important that parents also have an understanding about visitations and custody, Princewill says.

“It just becomes easier to manage if parties agree on the amount of time each parent can spend with the children and where.”

For those former couples who want to remain actively involved in their children’s lives, Princewill says that after the initial anger between the parties, the new reality requires working together and creating balance.

One issue that needs to be addressed quickly is when a child says he or she doesn’t want to visit the other parent, she says.

“It can be heartbreaking, but studies have clearly shown that if a child has a relationship with both parents, it really benefits them.”

If there is some reluctance from one parent about taking the children to visit their father or mother, kids will sometimes feed off that, Princewill says.

“Children are more perceptive than we realize and maybe on some level when they say, ‘No I don’t want to go,’ a parent may indeed feel some relief. The children feel they are pleasing a parent by refusing to go. But if you insist, unless there is a safety concern, often the children will have a fantastic visit with the other parent,” she says.

A pitfall to avoid, Princewill says, is using a child as a courier or spy.

“Do not try to gain information from the children about what the other spouse is doing or to relay messages. You should be encouraged to ask your children what kinds of activities they did with the other parent, but there’s a fine line when it comes to prying,” she says.

Princewill says most of her clients don’t need to go before the courts, preferring to work it out.

“They need to try to negotiate with the other person, but sometimes litigation is the only option.”

She says if a dispute does reach litigation, the courts can help both parties realize what is best for the kids.

Princewill also has a list of recommendations she gives to her clients so they remember to keep kids first in the divorce process, she says.

That includes not giving control to a child who can then dictate their terms to divorcing parents.

“The other parent may be far from perfect, but you are the adult. Don’t let a child run the show,” she says.

A child shouldn’t be the one deciding where he or she wants to live, Princewill says.

However, keeping children in the same comfortable surroundings and at the same school can help them deal better with the divorce, she says.

“There are already enough changes in their lives. Staying in the same household and at the same school can reduce the amount of disruption.”

If you need any help with family law matters, contact AP Family Lawyers in Scarborough, Pickering, Markham, and Toronto. You can call us at (905) 492-7662 or email us at [email protected] to schedule a consultation.