Owner of Amazon, Jeff Bezos could be looking at an expensive divorce! 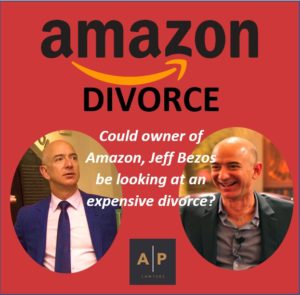 Everyone is talking about the owner of Amazon, Jeff Bezos and his wife, MacKenzie, who are getting divorced after a 25 year long marriage.

As sad as we are to hear this, life happens! What does this mean for Amazon shareholders? We do not have a clue, we are family law lawyers! What could the end of a 25-year marriage to the wealthiest man in the world look like? One word – expensive.

Amazon is currently one of the world’s most beneficial companies. It took shopping convenience to a new level in my opinion. Everything you need and do not need is on Amazon!

The major question everyone has is – did the couple have a Marriage Contract (aka Prenuptial Agreement)? Usually, couples only enter into a marriage contract when they have something to protect. When Jeff and MacKenzie were married, Amazon did not exist. Having said that, nothing could have stopped them from entering into one after marriage. Yes, that is a thing!

Aside from the Marriage Contract debate that is all over the internet – under Ontario Family Law, a marriage of 20+ years is a sensitive territory. It opens up the spousal support argument for a lifetime! According to the Spousal Support Advisory Guidelines, spousal support could be an indefinite obligation. The same thing occurs if a marriage was only 5 years or longer AND the age of the recipient plus the years of marriage add up to 65 (i.e. Marriage of 7 years and the recipient was 58). This is known as the Rule of 65 under the Spousal Support Advisory Guidelines.

The couple had 4 children and their eldest child was born in 2000. This also opens up the child custody, access and support issues. Who gets the kids? Who pays who child support? How will the custody and access arrangements work out?

Now, we don’t know yet if MacKenzie is claiming any type of support from Jeff, if there is an Agreement in place and if it will get messy. We only wish them well. We will follow their divorce proceedings to see what happens.