Keep your kids out of it

We may not realize it, but children are more observant than they seem. When children start to see their parents fighting, it has a major impact on their mental health, as well as long term and how they perceive relationships to be. One thing parents need to make sure about when going through a separation or divorce is that the children are away from the conflict and do not become messengers or therapists for the parents.

Not only is it unhealthy for the children and can affect their learning and development, but the courts strongly frown upon the children being involved in any conflict between parents. The adult issues that arise from separation need to be dealt with by adults and not have the children dragged into the battle and listen to what is going on.

Here are a few tips and judges rules for separated parents:

Children, although observant, are fairly sensitive and sometimes feel that the separation or conflict is caused by them. This can happen easily with them overhearing conversations, observing the parents fighting, or simply from the parents telling them too much information about the separation. A child should never feel that they are at fault for the breakdown of the relationship and that is why it is so important not to involve the children in the conflict. Make sure to keep any conversations pertaining to the separation between adults, with no children around.

In the end, the children are not the ones who are there to be the messengers and mediators and by letting them get involved with the conflict, it only creates a more negative and unhealthy environment for all parties involved. The best way to help keep the conflict away from the children is by seeking legal advice and letting the professionals deal with the issues, rather than involving the children.

Our family law lawyers at A. Princewill Law Firm aim to keep conflict to a minimum and make the separation process as easy as possible for everyone, especially the children. Let us help you. 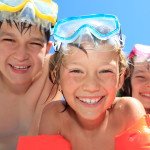